The Republic of Vanuatu is an archipelago of 82 islands in Melanesia that is inhabited by approximately 224,000 people. Vanuatu has a marine area of around 680,000 km2 with a coastline that stretches more than 2,500 km. Important ecosystems such reefs and mangroves consist of a total area of 4,110 km2 and 30 km2, respectively. Vanuatu’s economy has had a turbulent history since independence. After successful economic reforms however, the country’s economy is growing – as is its population, with an demographic growth rate among the highest in the Pacific.

Marine and coastal ecosystems provide benefits for all people in Vanuatu. Yet, these ecosystem services often remain invisible. Truly recognizing the value of such resources can help to highlight their importance and prevent their unnecessary loss.
The results presented here summarise a report on the economic values of Vanuatu’s marine ecosystem services. Once values are more visible, governments and stakeholders can plan and manage resources more sustainably, and maintain economic and social benefits of marine and coastal biodiversity in the long term. 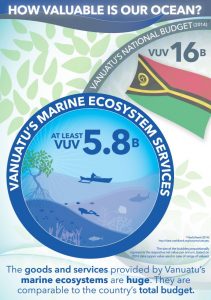 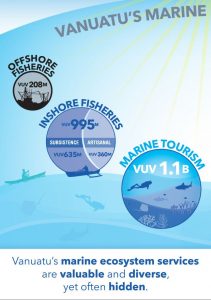 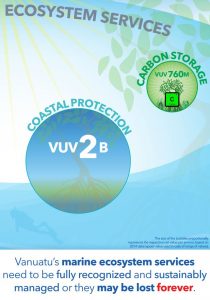 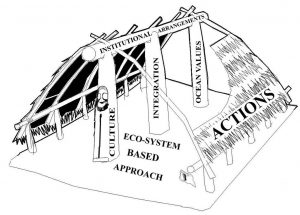 In 2016, the Vanuatu’s Council of Ministers approved the country’s first Ocean Policy that sets a clear framework for integrated marine spatial planning throughout its Exclusive Economic Zone (EEZ), including building an ecologically representative network of marine protected areas by 2020. The MACBIO Project supported the Vanuatu Government in the national consultation process for the policy and will provide ongoing assistance in implementing the marine spatial planning aspects.

Vision: To conserve and sustain a healthy and wealthy ocean for the people and culture of Vanuatu, today and tomorrow

The marine Atlas for Vanuatu compiles over hundred datasets from countless data providers and for the first time makes this treasure trove of marine and coastal information accessible and usable – as maps with complementing narratives, as data layers and as raw data: Marine Atlas – Maximizing Benefits for Vanuatu .

All these efforts  help paint a larger picture, a comprehensive description of the entire marine environment of Vanuatu into bioregions means that the nation is now able to identify an ecologically representative network of marine protected areas by ensuring examples of each bioregion are protected…read more

To assist the Vanuatu government to achieve its targets for a marine spatial planning and effective management, MACBIO facilitated a review of legislation, policies, strategies and plans relating to the development of marine protected areas in Vanuatu.