Tonga’s EEZ is about 700,000 km2, smaller than the EEZ of Vanuatu, but larger than that of Italy and South Korea. Land (707 km2) comprises only about 1% of Tongan territory. Despite the small land mass, Tonga has a varied topography, including a reef area of 1,500 km2 with barrier, fringing as well as submerged patch reefs. The country’s coastline extends some 419 km with 6 active gazzeted marine reserves as well as several managed areas. Tongatapu is the main island of the Kingdom of Tonga, with the capital Nuku’alofa. It is characterised by flat, fertile plains. The Ha’apai island group is comprised mostly of small coral atolls and extensive lagoons but is also home to one dormant and one active volcano; the Vava’u islands are surrounded by high limestone cliffs and meandering bays; the island of Eua is virtually a limestone mountain rising from the sea.

Marine and coastal ecosystems provide benefits for all people in Tonga. Yet, these ecosystem services often remain invisible. Truly recognizing the value of such resources can help to highlight their importance and prevent their unnecessary loss.
The results presented here summarise a report on the economic values of Tonga’s marine ecosystem services. Once values are more visible, governments and stakeholders can plan and manage resources more sustainably, and maintain economic and social benefits of marine and coastal biodiversity in the long term. 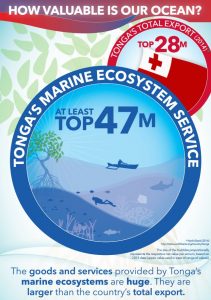 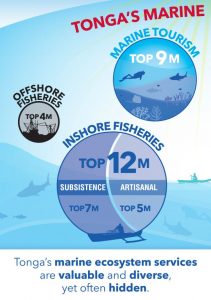 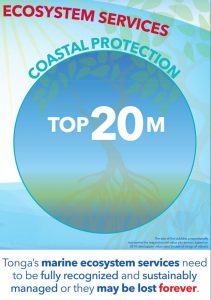 In July 2015, Tonga’s Cabinet decided to initiate marine spatial planning throughout its EEZ to the outer extent of its EEZ. The government Marine Spatial Planning Technical Working Group, called the Ocean 7, is working with MACBIO to define the work-plan, timelines and deliverables as part of Marine Spatial Planning progress for Tonga by 2020.

On the 13-15 October 2015, the Department of Fisheries and the Civil Society Forum of Tonga convened a nation-wide “lessons learned” conference on marine Special Management Areas in Ha’apai, Tonga, supported by the MACBIO Project.

Vision: Ecologically sustainable social and economic development of Tonga’s ocean for the benefit of all Tongans

MACBIO further drafted marine bioregions across Tonga at a scale that can be used nationally, as a basis for the systematic identification of an ecologically representative system of marine protected areas.

The marine Atlas for Tonga compiles over hundred datasets from countless data providers and for the first time makes this treasure trove of marine and coastal information accessible and usable – as maps with complementing narratives, as data layers and as raw data: Marine Atlas – Maximizing Benefits for Tonga

To assist the Tonga government to achieve its targets for a marine spatial planning and effective management, MACBIO facilitated a review of legislation, policies, strategies and plans relating to the development of marine protected areas in Tonga.

Moreover, MACBIO supports marine and costal biodiversity management on three sites in Tonga. Two learning sites are in Ha’apai and an integration site in Vava’u.