“The Ocean Conference has changed our relationship with the ocean. Henceforth none can say they were not aware of the harm humanity has done to the ocean’s health. We are now working around the world to restore a relationship of balance and respect towards the ocean”

said the President of the UN General Assembly Peter Thomson, Fiji, at the closing of the UN Ocean Conference. The high-level Conference to Support the Implementation of Sustainable Development Goal 14 at the United Nations Headquarters in New York from 5 to 9 June 2017 was co-hosted by the Governments of Fiji & Sweden.

The 193 Member States of the United Nations unanimously agreed to a set of measures that will begin the reversal of the decline of the ocean’s health as the five-day Ocean Conference concluded. The outcome document, together with more than 1,300 commitments to action, marks a breakthrough in the global approach to the management and conservation of the ocean. Recognizing that the wellbeing of present and future generations is inextricably linked to the health and productivity of the ocean, countries collectively agreed in the Call to Action “to act decisively and urgently, convinced that our collective action will make a meaningful difference to our people, to our planet and to our prosperity.” (Read more)

That the second highest number of commitments comes from the South Pacific, highlights not only the importance of the ocean to Pacific Island Countries, but also their commitment to “Conserve and sustainably use the oceans, seas and marine resources for sustainable development” (SDG14). 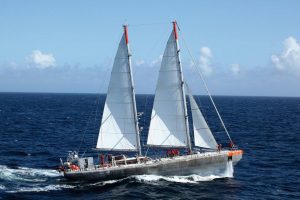 Thus, Pacific Island countries also raised their voice at the Pacific Voices for a Global Ocean Challenge Conference in Suva, Fiji, 8 to 9 June 2017, as external regional side event to the UN Ocean Conference – joined withe oceanographic schooner ‘’TARA’’ that berthed in Suva as part of its two-year environmental survey across the Pacific Ocean. Linking Suva with New York City, Fiji shared 10 Ocean Messages with the region and the world:

The MACBIO project was invited to highlight recent efforts by national governments in Vanuatu, the Solomon Islands, Fiji, Tonga and Kiribati, in its support of “Integrated ocean governance through ecosystem service valuation and marine spatial planning tools and processes”. (view Presentation)

Complementing the presentation, at an information booth, hardcopies of the five National Marine Ecosystem Service Valuation where made available. These can be downloaded here.